Tips for other overlanders

Due to a lot of questions by email from other overlanders I’ve put some tips together. Please don’t hesitate to ask for more information as I can make this page even more complete!

Preparation
First things first. Keep it simple or make sure its done properly. We have seen overlanders with cars weighing more than 4 tonnes. This puts a heavy strain on the vehicle causing problems to parts that you might have been carrying spares of. Make sure the vehicle is properly maintained and checked before you start the trip and replace everything that is worn. Don’t think it will be OK. I know there are plenty of spare parts around of Africa, but it will always be second hand, a Chinese counterpart or very expensive as it has been imported from Europe. Don’t buy Chinese parts or equipment for your car, it will end up breaking or doing damage to something else. If it looks and feels dodgy, it is. We had a dodgy roofrack: 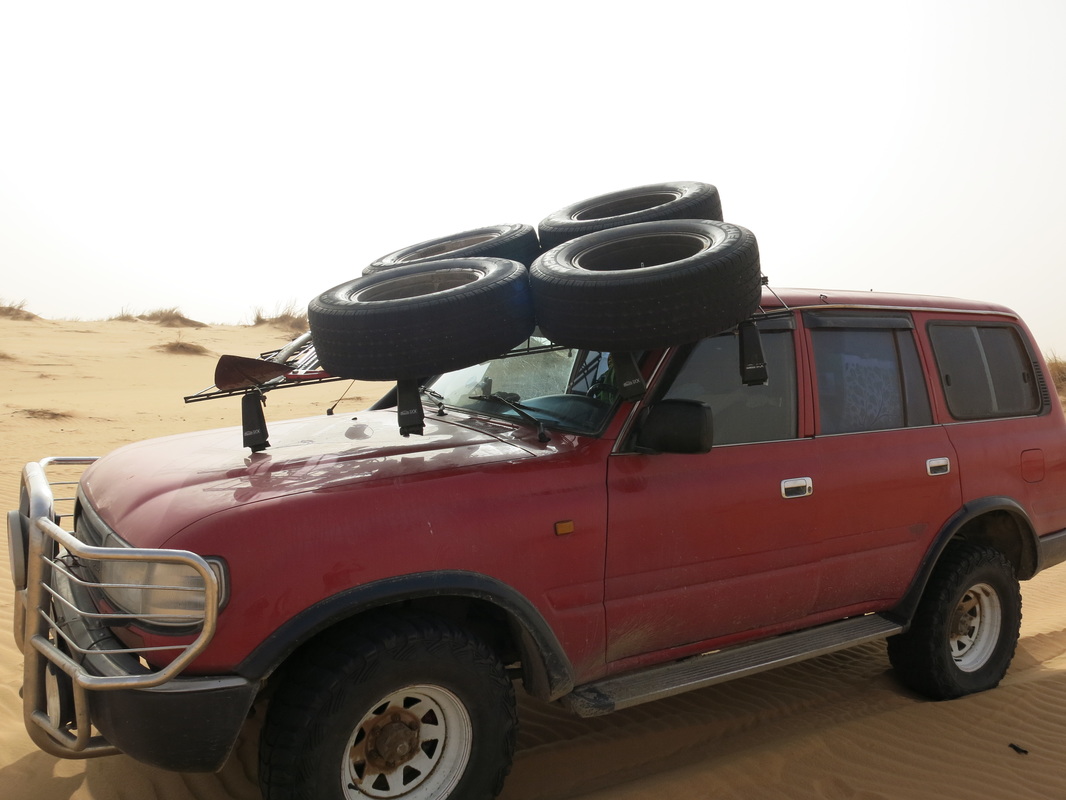 Route. If you are going south on the west coast get all your visas in Accra, Ghana. One thing we regretted not doing. The commercial overland touring trucks get them all in Ghana, as it’s cheaper and faster. Situation of early 2015, this will most likely change anytime.

Cooker. Get a multi fuel burner, or at least a petrol one. All over Africa they use different gas bottle fittings. We ended up dumping our European gas burner in Mauritania and buying a new set for 15 euros. Lasted 3 to 4 months until Cameroon where we got a new bottle. Took 4 hours driving around the city to find one matching the old one. In South Africa we ended up without gas again, but luckily we were able to receive a new bottle from a friend. I would recommend a multifuel stove burner from Colemans or get a set of converters for your gas bottle.

Tires. Don’t take 4 spare tires. I know we did, but like we expected, it was completely unnecessary. We left 2 behind in Cape Town. One will be sufficient and take a tire repair set, an inner tube and compressor. On the west coast we have had 2 flats and both times we were able to fix them just down the road. The flats were most likely because of driving too fast on gravel with too much pressure. We drive with 3 bar on tarmac (none or few potholes) and 2 bar on gravel roads. Lower if going off road. We started with old tires expecting to change them in Spain. We never did and just kept driving. Now we got a new set of BF Goodrich AT tires in Cape Town, which I would recommend. Another detail is, make sure your spare tires and rims are the same size as the ones you have on the car as this will prevent wear on your differentials.

Sleeping setup. As we are a bit on a budget and our previous experience with a bed frame and mattress in the car worked fine, we decided not to take a roof tent. It makes the car more top heavy anyway, making off-roading a bit more uncomfortable. Wild camping inside the car is a lot easier and nothing indicates people are camping. I would still recommend both, depending on your budget.

Storage. I built a bed frame with two big drawers underneath. I wouldn’t recommend to put them on sliders as these get full of sand and take up some of your precious space and budget. Just slide the boxes in loose. One drawer full of tools and spares and the other full of food. To tie things down in or on top of the car use ratchet straps, they work the best. To prevent dust coming into clothes or other stuff use leather water proof bags, also used on (motor)bikes and for hiking.

Mosquitos and malaria. We hung up a mosquito net in the car using strong neodymium magnets to the roof. Works brilliantly without having to drill holes everywhere. Next to that we bought the doxycycline tablets in morocco and Benin for a good price. We used them from Burkina Faso to Namibia. Side effects very little, just watch out for the sun. Oh yeah take plenty of sunscreen with you! It’s more expensive in Africa as the locals don’t use it.

Fuel. Again we are on a budget. Adding a new auxiliary fuel tank would have cost us a fortune. Instead I removed the spare wheel and made a jerry can holder from a hood of a Citroën that was laying around. Adding 5 jerry cans (100 litres) makes a total of 190 litres. This gives us a range over 1500 kms. Out of experience this was more than plenty. It was never necessary to carry this much fuel but it saved us some money filling up only in big cities where fuel is cheaper. Next to that the quality of fuel is debatable in between cities.

Winch. We added one, never needed it. Don’t take one unless you plan to do some serious off-roading independently. It adds 50+ kgs to the front that you don’t really want.

Fridge and batteries. We bought a little 11 litre fridge the Waeco CDF11 and had 4 19 Ah motorcycle batteries (saved and recycled from work) as our auxiliary batteries. They are charged via a T-max charging system with a big solenoid. Cheap and effective. Installed it all myself under the hood. These gave up after 8 months and we were able to save another AGM 60Ah battery from an other pair of overlanders that were redoing there electronics.

Do regular services. I do them myself and end up under the car every 6 to 7 thousand kms. This way I can see things wearing out and replace parts before they become big problems. If you have two left hands, try to do a mechanical course beforehand or do your research and find proper mechanics in Africa on your route. Don’t cut on the budget here as proper mechanics are scarce in Africa, therefore expensive. Always stay on top of what they are doing and ask questions. It is a bit annoying for them but necessary to keep them going.

Budget. That is a very personal subject. It totally depends on your lifestyle. We are on a tight budget and planned about 7,5 thousand euros per coast. So 7,5 down to Cape Town and 7,5 back up to Europe. We do a lot of wild camping to realise this budget. Overall the visas have been more expensive and fuel has been cheaper than expected. I would say this is the bare minimum to enjoy this trip properly, but like I said that is personal. People do this trip on a bicycle paying a lot less.

Carnet de passage. We got ours from the German ADAC. Good efficient service. Make sure you understand how it works as you will be explaining this to many border officials. We have used it in many countries and made life a lot easier. There are plenty of countries that do the temporary import licenses, but I expect you will be paying more money for these than the carnet.

Laundry. Here is a good tip from other overlanders. Get a water tight bucket, put your laundry in with water and soap, tie it down on your roof rack and start driving. It will be clean the next time you camp to hang and dry. We also have a foldable bucket, very nice to have.

Awning. We bought a big tarp from a camping shop with a few poles and strings for the rain and sun. We set it up once and never again. It was just too much effort to set up. We disposed it. If you want an awning or shade, it has to be able to be set up fast and proper. Otherwise you will never use it or it will get damaged very fast. We have seen people using the Ostrich Awning from South africa. Brilliant, easy and fast to set up. Nevertheless they only used it a couple of times coming down the coast. It doesn’t rain much in Africa so most of the time it’s for shade. There are always plenty of trees around for that, so I wouldn’t recommend an awning. Keep it simple :)
Powered by